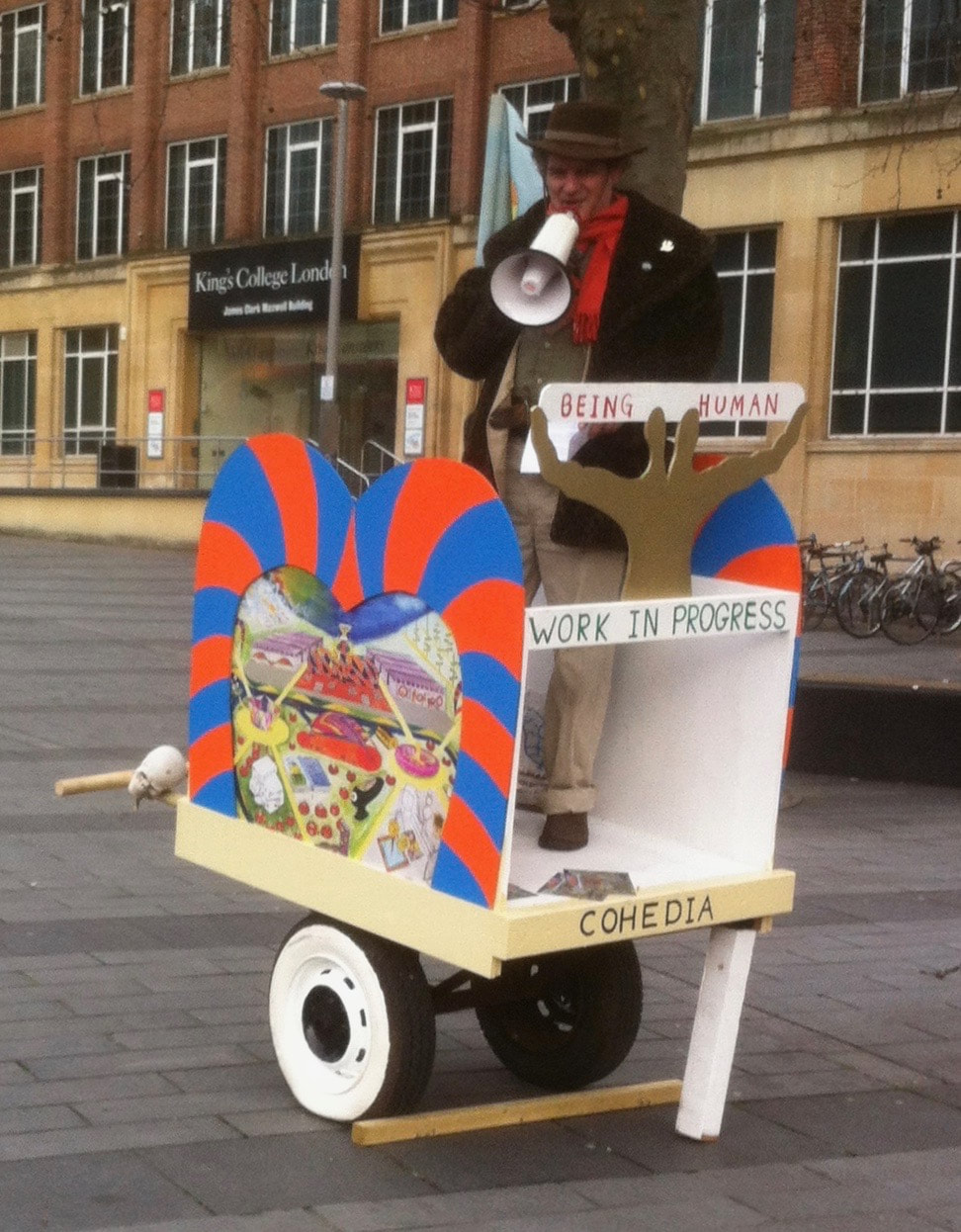 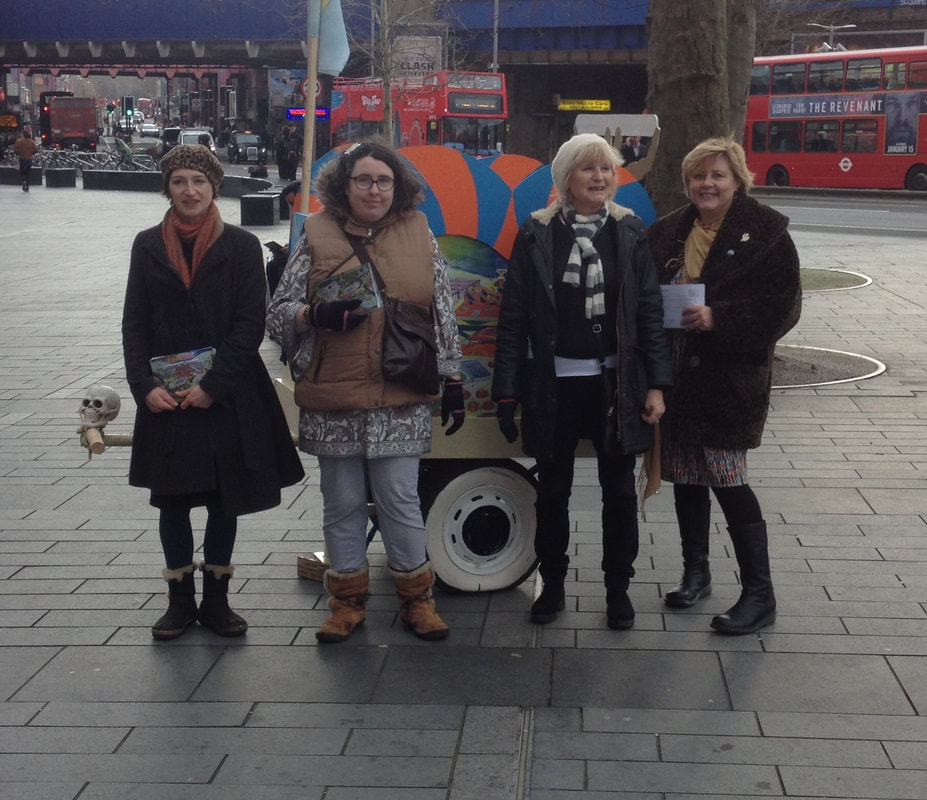 COHEDIA 2016:  A human campaign.
Come one, come all: Let the pageant begin.

A diplomatic party from Cohedia will be attending the Utopia 2016 opening at Somerset House on 25th January, 2016. The ‘Wishing Gate’ carnival float will lead the pageant heralded by Cohedia’s creator artist Xavier White.

My friends and I are on a research journey from the mind-expanding cityscape of Cohedia.

Assembling from 11am by the Plaza between BFI I MAX and St John Church Waterloo to leave at 12, the Wishing Gate Pageant aims to arrive at Somerset House and present Cohedia’s flag at Midday, Monday 25th January 2016.

About the artist:
Xavier White, survivor of a near fatal head injury an outside artist. Celebrates the compassion and resilience that has enabled him to return to his Mind Expanding Cityscape with his Wishing Gate Pageant carnival float and pageant to visit Utopia 2016. 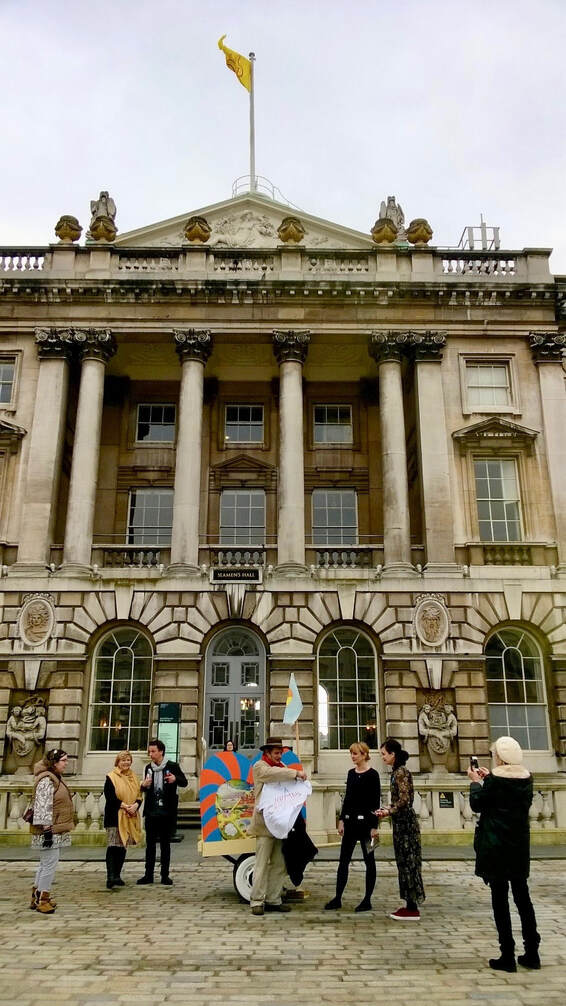 Cohedia is a many sided jewel of an idea, polished by time and thought, where you can take a mental stroll in its streets and vistas to appreciate the full ambience of the settlement. Thought and effort are put into making an atmosphere that is coherent and conducive to the development of the human spirit enabling brain connections that bring about cognition. One can travel in three dimensions, sideways, onwards and up.

We have travelled long and far, reporting back our discoveries. We intend to investigate the Utopia 2016 events to research whether there are any developments in Utopia, after 500 years, that could be applied in Cohedia whose foundations were conceived 11 years ago. We come in peace in anticipation of inspirational exchange of ideas.

We hope this pageant will be welcomed in the manner it arrives, with it’s caring dance of wonderment. As a token of collaboration, we bring a gift of a Cohedia flag, offered in exchange and good will.

We invite you to view Cohedia’s Mind Expanding Cityscape, on youtube’s around the world telescope, or come in person to the Youtopia exhibition, at the Museum of the Mind at Bethlem Royal Hospital, Beckenham in February.

The Human Campaign progresses on where Xavier is to become artist in residence at London South Bank University, with the School of Health and Social care, working with themes of transformative learning, neurological connexions, building a culture of compassion and resilience for performance praxis. 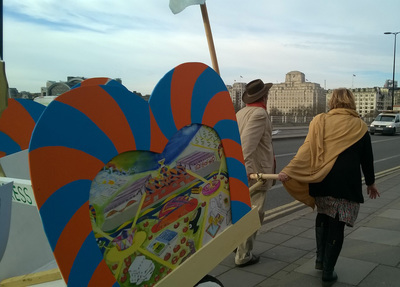 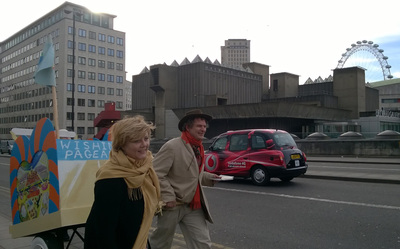 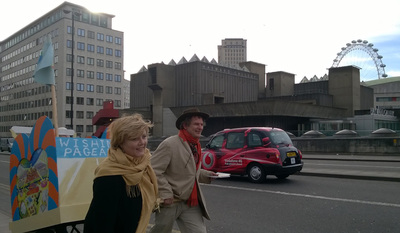 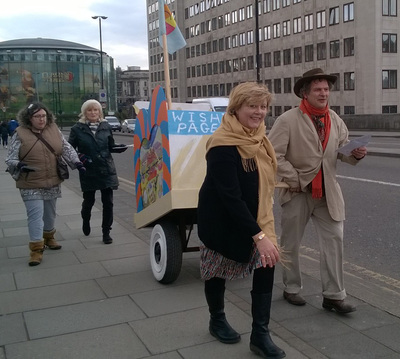 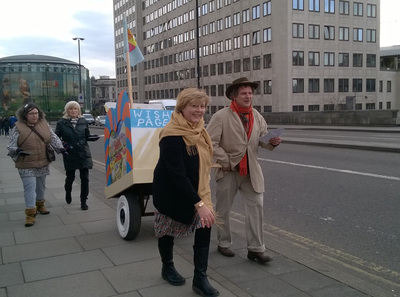 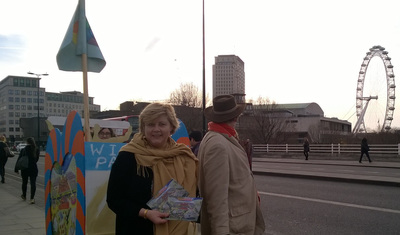 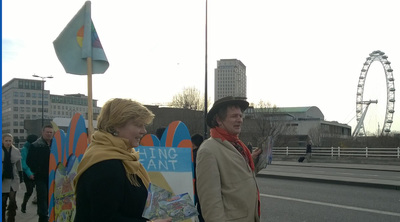 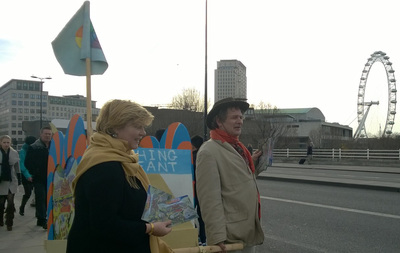 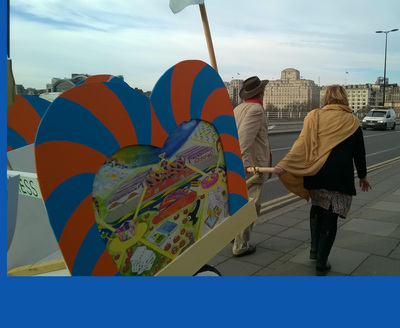 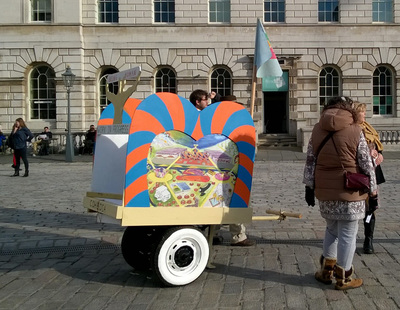 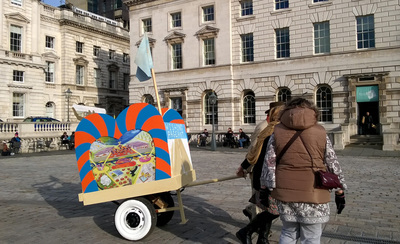 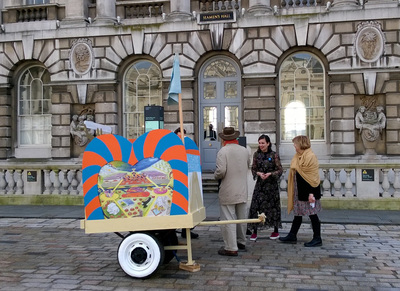 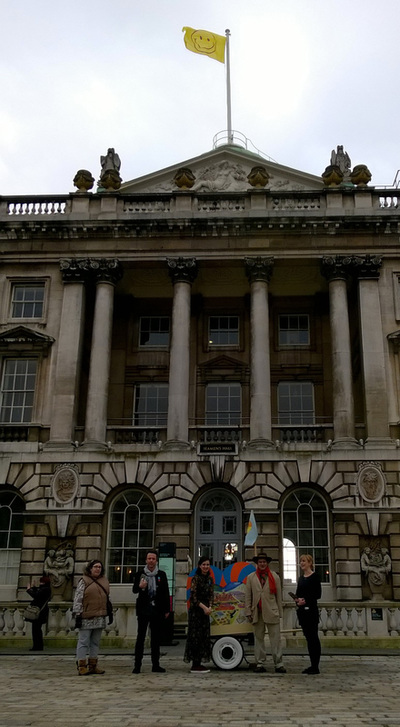 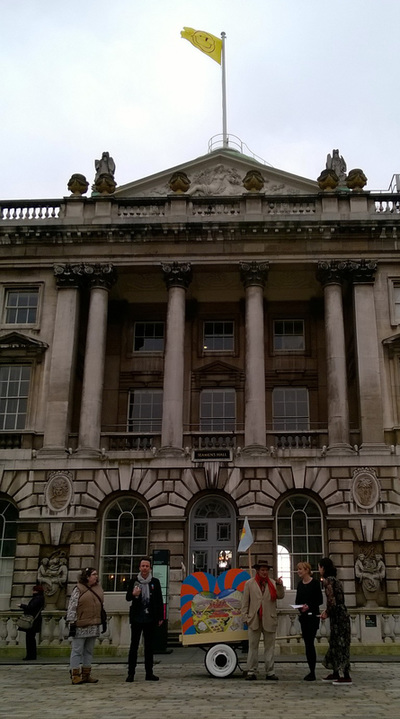 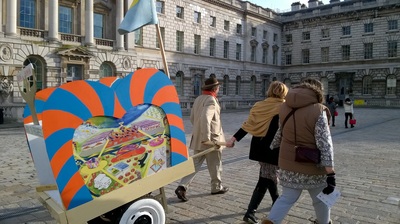 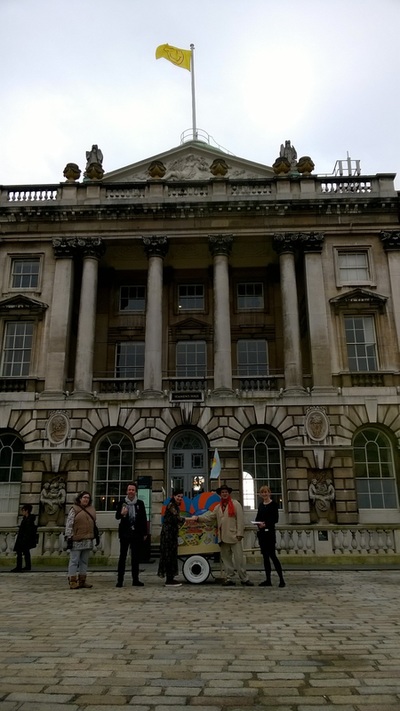 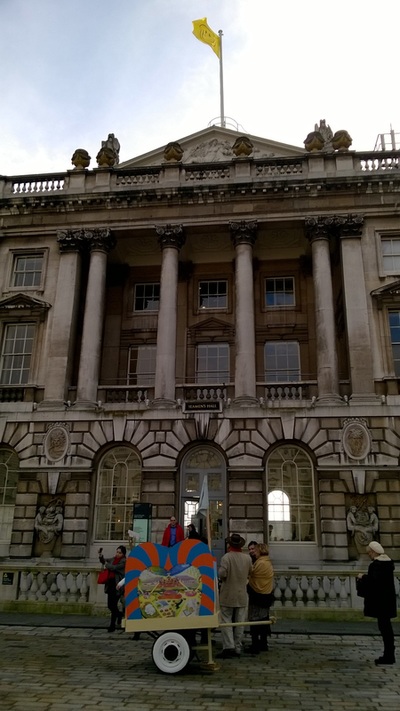 Cohedia’s Large Canvas will be on display  at The Museum of the Minds ‘Youtopia’ exhibition in Feb 2016 to further celebrate the 500th anniversary of Thomas More’s Utopia book, published in1516.

The Wishing Gate Pageant carnival float will lead a pageant was built and created by Xavier White. And will tour London during the Utopia 2016 year.

About Utopia 2016:
Utopia 2016, a year of imagination and possibility
http://www.somersethouse.org.uk/about/press/press-releases/utopia-2016-a-year-of-imagination-and-possibility\

The first artist in residency project at LSBU’s School of Health and Social Care celebrates the opening of artist and near fatal head injury survivor Xavier White’s My Human Campaign. The basis of this residency is to help health and social care students learn more about caring for people amidst health or social adversity with compassion and resilience. Learning and praxis processes in health care merged with a long standing interest in neurology are central themes to his work. His focus is on what others neglect; hidden connections, creative interactions such as those taking place internally the workings of the human brain, and how these hidden communications can be further understood through intentional human connectivity.

This aims to be a ground-setting exhibition that explores how art can promote understanding of the ‘hard problem of consciousness’: investigating the leap between our neurones (Brain) and our consciousness (Mind).


My Human Campaign residency at LSBU is an opportunity to develop visualization of my neurons cognizing with charged atoms, ions, waves and chemical molecules, neurotransmitters being released and accepted across the synapses. How the oceans of different atoms and molecules in our brains brings us our conscious minds and the effects those currents have on our behaviour and interactions with the environment and wider world around us…

The exhibition will be held at:

Xavier White is the first LSBU Artist in Residence to announce

An exhibition exploring resilience and compassion for students at
London South Bank University’s School of Health and Social Care.

Photographed by Rankin
as Part of Artfunds Museum of the year award.
The Museum Of the mind, Bethel royal hospital have been Shortlisted.
http://www.artfund.org/prize/finalists/bethlem-museum-of-the-mind 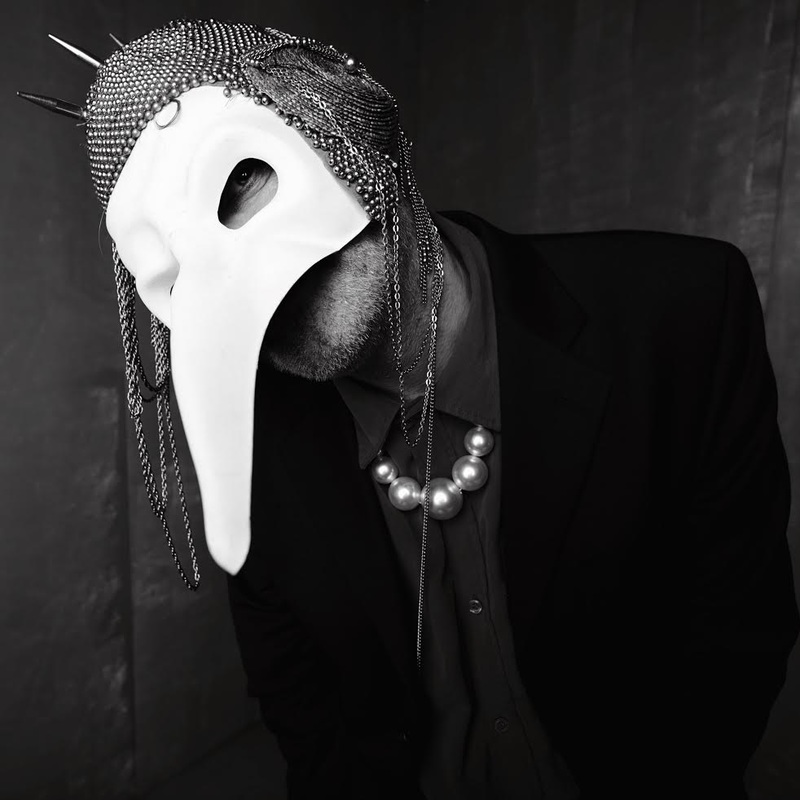 Outside In voted Xavier Artist Of the Month, Mr April 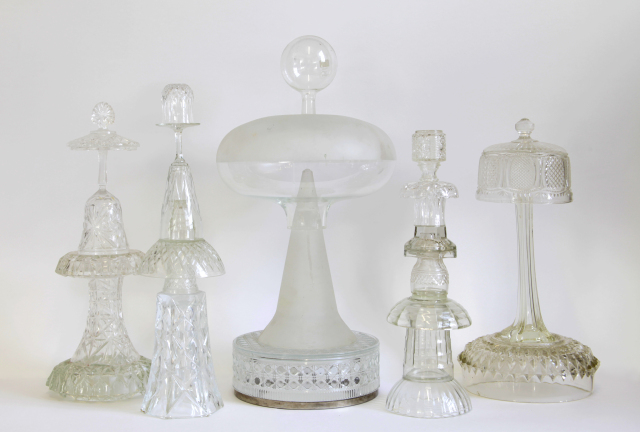