﻿
XAVIER WHITE’S FULL CIRCLE, a glass art exhibition: 2014
Xavier returns to the hospital where at the age of eighteen he had to re-learn his life skills following a near fatal head injury.
In 1985 Xavier survived a near fatal accident while cycling and now lives with subtle but disruptive long-term consequences of a serious head injury. Since leaving the Maudsley Hospital’s neurosurgical unit following a miraculous recovery, Xavier has overcome many obstacles with his passion and creativity and now creates artworks touching on issues surrounding head injuries, neurology, neural architecture, ideas around the brain and mind, up cycling, making processes and the built environment. Xavier still cycles and is hoping to become a volunteer art therapy facilitator at the Maudsley hospital in the near future to fully complete a therapeutic circle. 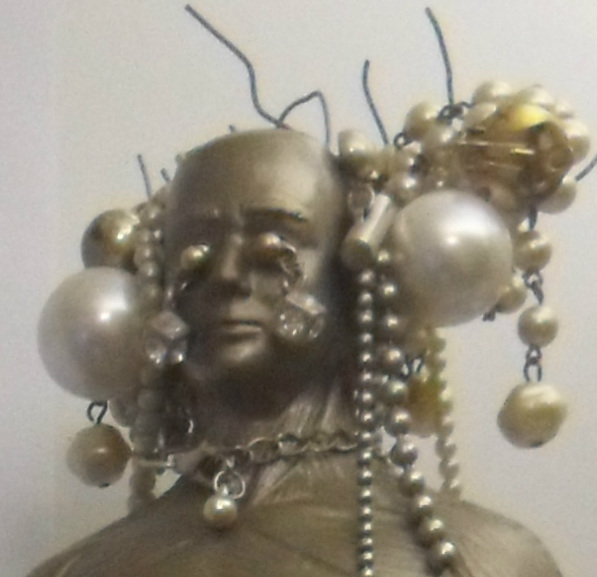 “This has all been inspired by the Duggan Morris Architects building, staff and ambience of ORTUS learning and events centre, part Maudsley Learning.” Xavier White 2014

Xavier White’s Full Circle charts Xavier’s creative journey throughout his rehabilitation; exploring his attempts to visualize the inner workings of the brain and his investigations into human learning processes. With works ranging for delicate glass assemblages and images, larger installations, a number of stained glass windows and films on youtube.
Xavier White's Full Circle, a glass art exhibition reviewed by Anna McNay
With its spacious atrium and glass ceiling reaching up to the clouds, Duggan Morris Architects’ award-winning ORTUS learning and events centre at South London’s Maudsley Hospital couldn’t be a more appropriate location for Xavier White’s Full Circle, suggesting that, with an appropriate amount of effort, anything is attainable.

White is certainly someone who strives hard in the face of adversity. Growing up in the shadow of the Maudsley, little did he know that he’d end up there himself in 1985, following a near fatal cycling collision, as a result of which he lay in a 10-day coma. Now, 29 years later, White returns to his place of recovery, coming, as the exhibition’s title puts it, “Full Circle”.

As an artist who, since his accident, has been rehabilitating creatively through working largely with glass, this exhibition is both a retrospective, a culmination of his achievements – both in his career and his life – to date, and a promise of things to come. It speaks of his personal struggles, but also of those of his fellow survivors, and, seen through a wider lens, calls out to all of us who battle our demons and are challenged every day. After all, we all have brains.

Included are works such as What’s on at the Globe tonight? (2004), a piece White made during his City Lit foundation course. Following instructions on how to make the model in wood, White made his in glass, going on to win the V&A’s Inspired by competition for people in adult education and then being selected for a Bonham’s glass auction. On the stage, he has lovingly engraved a scene from his painting class where he was working on a large canvas as part of his ongoing Cohedia project, creating an imaginary, mind-expanding cityscape.

“The entire stage of the theatre corresponds to ‘working memory’, the immediate memory system in which we talk to ourselves, visualise places and people, and plan actions,” says White, referring to the work of eminent psychologist Dr Bernard Baars. “Mental architecture can be described as a working theatre. Working theatres are not just ‘Cartesian’ daydreams – they do real things, just like real theatres.”

White is a thinker, who has researched deeply into the fields of neurology, neural architecture, learning styles and brain function. And yet, since his accident, after which he had to learn, from scratch, how to even put one foot in front of the other, he unsurprisingly struggles with formal education. Windows of Opportunity (2008) is an ode to these struggles: hexagonal glass panes, painstakingly painted with literary and scientific figures and references, designs for the university building in Cohedia. “Rectangular windows pushed out, phat with knowledge,” says White.

Why is Life Set Chess Game? Moves, Interactions, I can’t keep up! (2009), which has a companion work living in White’s own salon gallery at his home in Blackheath, is an exquisitely hewn chess set, composed of precariously but meticulously balanced glasses and decanters, pieces from his ongoing Verrelic Spires collection. The analogy is clear; the perpetual need to think, plan, and take action, with the risk of losing hanging heavy.

Think about it… (2014) comprises further such arrangements, displayed in a pristine, and somehow scientific vitrine, etched with images of hands, eyes, ears and mouths, nostrils flaring, visualisations of our senses, the closest most of us get to the functioning brain. Colourful glass nuggets, coded as charged ions, neurotransmitter inhibitors and exciters, are scattered about, resplendent in the refracted light. Either side are a thinker and a gung-ho teenage White, cycling along blithely, unaware of the life-changing event to come. Both symbolic of freedom. A beautiful sight, art to be enjoyed for its aesthetic value, but also a lesson in science, with White’s written reminder: “As you are observing this, your brain’s neurons are passing information to each other through an organic electrical exchange, releasing neurotransmitter molecules at synaptic clefts. This metabolically driven exchange is how we feel and think at the micro-biotic level.” And this exhibition is certainly one to incite both feelings and thoughts.

Upstairs on the roof terrace, with views over London’s greatest glass structure, the Shard, White has decorated the tinted glass wall with frosted vinyl circles, celebrating the metaphor of his journey. Opposite this large meditative arrangement are three smaller circles with the words Health, In and Mind, comprising Maudsley Learning’s mantra. The exhibition and its location point to White’s achieving the pinnacle of success (not to say he won’t continue to climb from here on in), and encourages others to likewise reach for their dreams atop the spires. As White concludes: “Xavier White’s full circle is on a roll.”

Anna McNay is a freelance art writer and editor, and Deputy Editor at State media. She can be followed on twitter @annamcnay 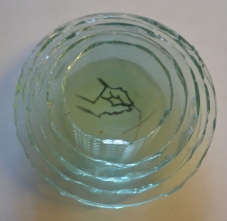 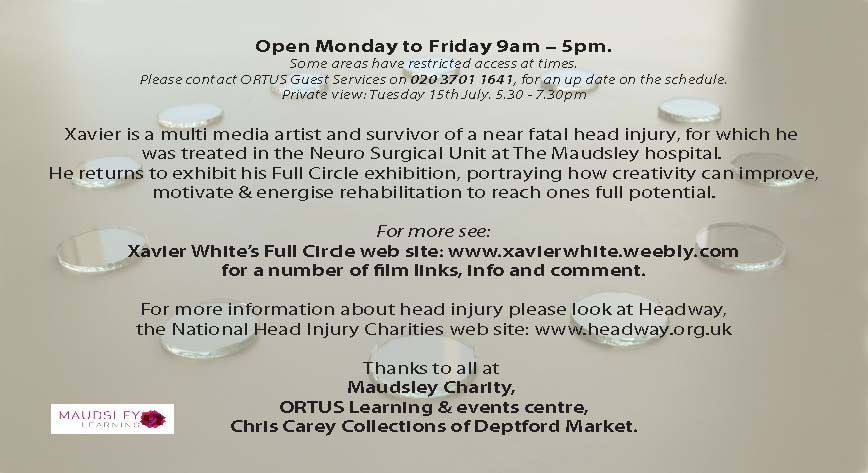 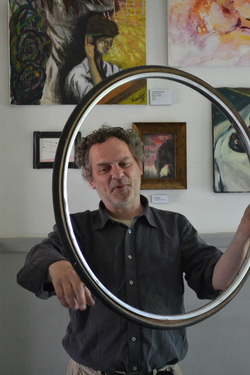 A joy in circles

A single line with no end, full!

That stretch into spirals when drawn.

And will roll when pushed along, 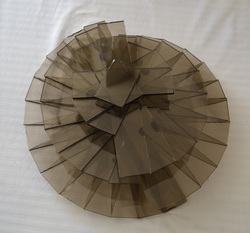